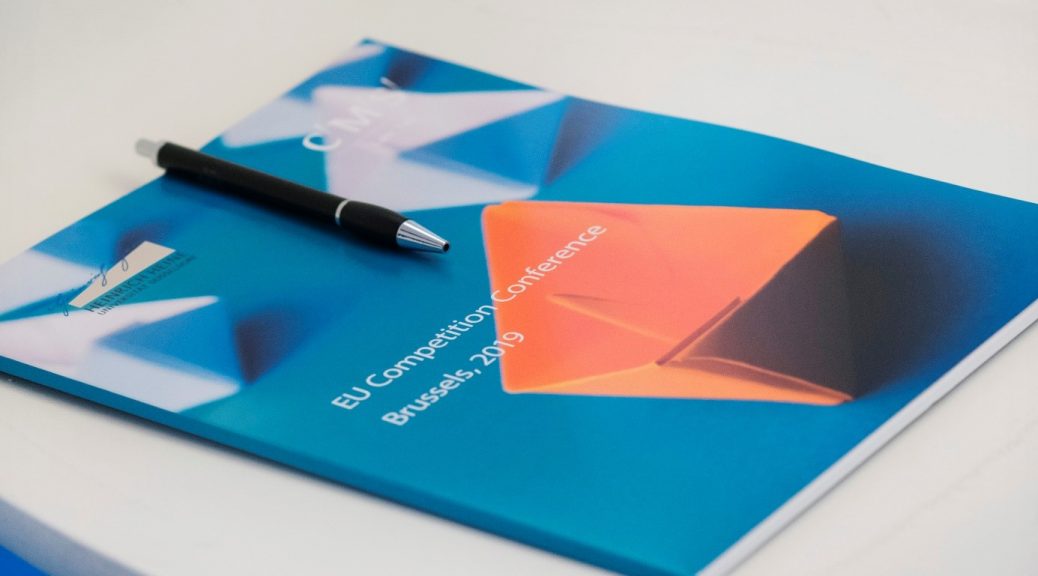 Every two years our antitrust team jumps into the Thalys and heads to Brussels to discuss current developments in competition law. This year the timing of the Conference couldn’t have been better. The event took place just one day after Ursula von der Leyen announced the reappointment of Margrethe Vestager at DG Comp. Maren Dittrich and Adrian Deuschle have a conference debriefing for the readers of D’Kart.

Audience: A crowd of 200, many inhouse lawyers, some enforcers, people from trade associations – and of course law firm representatives (not only from CMS) and, well, a bunch of Ph.D. Students from Düsseldorf University.

So another Conference about digital ecosystems and how antitrust has to deal with GAFA?

No, not at all. “There will be no digital talk today” as Michael Bauer, Head of Competition & EU Group at CMS Brussels, said in his welcome note. Well, not everybody was fully compliant with that restriction.

What? No digital talk? What did they even talk about?

Luxury goods for example. At present, DG Comp is evaluating the Vertical Block Exemption Regulation (VBER). This safe harbour is important to guarantee certainty and reduce compliance costs. Marieke Scholz from DG Comp said that they are quite in the middle of evaluation and the support from companies, consumers and national competition authorities has been overwhelming. It seems that the current regime is working well, but it has to adapt to new developments like the increase of online sales (sorry, this was digital talk again!). One of the major problems seems to be the inconsistent use of the rules on national level. Nicolas Lievens from L’Oreal stressed this with a view to preserving selective distribution. The famous Coty Decision with its focus on luxury good suppliers who can prohibit its authorised distributors from selling their goods on a third-party internet platform is still troubling. Dr. Markus Kürten from Adidas stated that it’s still not clear what falls under the definition of a luxury good. Benjamin Neyt, a lawyer from LVMH, suggested from the audience that it is up to the brands to define themselves as luxury brands.

Another big point was resale price maintenance (RPM). Dr. Luca Schicho from the Austrian competition authority spoke in favour of more clarity in the VBER. Black/White solutions do not fit. Concerning leniency, Schicho revealed that you can apply for leniency in Austria in RPM cases and you may even possibly get a 100 % reduction of the fine. So far, there have been way more horizontal than vertical leniency applications. Schicho’s proposal: “If it happens make sure it happens in the right jurisdiction”.

Who was the VIP in the room?

Probably Dr. Andreas Schwab, who acts as Vestager’s partner and counterpart in the European Parliament and who was the Parliament’s rapporteur on the damages directive and ECN+. He was talking about the German-Franco-Polish paper about modernising European competition law. For him it was actually a surprise that Poland joined that paper. He talked a lot about majorities, being a politician after all. Industrial policy considerations are not only a legal but also a political question, and Schwab seemed pretty clear that from a political perspective some of the proposals will fail to gain a majority. He proposed to see the paper as an impulse for further discussions on the European level.

What did the company representatives actually think of so-called European champions?

All panellists, including ThyssenKrupp’s Benedikt Ecker, were sceptical about political considerations in merger control. There is no evidence that bigger companies are better. “Even shareholders can’t predict the market, so how can government?” stated Ruben Maximiano (OECD). We couldn’t agree more! One of the cases discussed was the prohibition of Thyssen/Tata. Ecker said a different market definition would have been important for the case, but not the industrial policy aspects. He also mentioned business cycles. Angelique de Brousse (Johnson&Johnson) is sure that European competition law is already flexible enough to tackle the issues raised by Chinese players, who are coming to Europe. Some of the things discussed as “industrial policies” could be considered in the efficiency defence, but this is a weak tool, too. She also pointed at the fact that environmental or employment concerns could come into play, once the field is opened up.

Anything else on mergers?

Gun-jumping and misleading information in proceedings with the agencies are topics troubling inhouse lawyers. After all, the authorities stepped up their efforts and handed down enormous fines, as in Altice for example. De Brousse laughingly explained that it makes her job easier towards top-management if she can point at the hefty risk… Asked whether rules are maybe too vague vis-à-vis huge fines, Étienne Chantrel, head of the merger department at the French Autorité de la Concurrence, revealed that the French authority will give guidance this week. With only 2 or 3 gun-jumping cases out of 200 – 250 he said that obviously companies usually know very well how to behave. Harald Kahlenberg suggested to turn to the authorities to minimise the risks.

Did anything go wrong? Any surprise – maybe positive ones?

We did not notice any mishaps. But the panel on abusive practices had two memorable moments out of the orderly: Firstly, very last minute Karen Schutyser from Coca-Cola was unable to attend, but with Brussels professionalism Michelle Gibbons from AIM simply jumped in. And the man sitting next to her, AB InBev’s Ben Graham, had his birthday on the panel. No singing, but at least he got a nice birthday cake!


So, a panel on abuse with former judge Cruz Vilaça surely talked about Intel, he was the rapporteur, wasn’t he?

Lentamente! The discussion started off with quite critical remarks on the power of buyer groups and retail alliances. The Commission is currently reviewing this topic. Apparently, it is highly aware of the potential power of delisting by retailers, which Gibbons and Graham encouraged. Philippe Chauve (DG Comp) went on to pose the question if a strong retail alliance harms the consumer in the long run. According to him, if a product is not available in a shop anymore, but in another one around the corner, it is difficult to see consumer harm.

This got Jan Werner (Metro Group) on his feet in the audience, exploding arguing that delisting may be a necessary practice to counter the price increases of suppliers, so he played down put into perspective the power of delisting. In fact, he said, it would be impossible for a retailer to delist e. g. Coca Cola. Werner perceives the actual balance of power quite differently from the colleagues on the panel, and he pointed to the fact that in food & beverages there are only a few suppliers, each holding high market shares. Jan Werner’s “question” was probably the emotional highlight of the day! (Sorry, Ben, your birthday was also very emotional.)

So, what about Intel?

The second part of that debate concentrated on the Intel case. Prof. José Luís Cruz Vilaça who had indeed dealt with Intel at the Court of Justice hinted that judgments sometimes develop their own life (as Björn Herbers from CMS put it later). In fact, in the former judge’s opinion Art. 102 TFEU is not so much focussed on competitors and their behaviour (as in the as-efficient-competitor test, which was said to be only an econometric test), but more about the efficiency of competition as a whole. Probably, some would have wished for more precise reading guidance from the author…

The final panel was on damage claims? Any new insights?

That was an entertaining final! While reviewing the situation after the Damages Directive, Dr. Tilman Makatsch (Deutsche Bahn) compared the situation with the gold rush in America – most gold diggers did not get rich, but those selling the equipment did… He had the audience giggling. There are still huge differences in the member states, which leave much to wish for for claimants. For instance, Makatsch said UK courts could be really expensive, but give high-quality judgments. The US courts drive you into settlements. He praised the German courts for their urge to find the right solution for a case – if for the price of incredibly lengthy proceedings. He referred to the elevators and escalators case in which Deutsche Bahn (amongst others) sued for damages in the Berlin District Court – and which is still pending after 9 years without even an oral hearing. In addition to that, the panel seemed to be doubting the utility of disclosure orders. At least in Germany courts do not seem to be used to such form of disclosure and there is no case law (until now).

A cartel damage panel surely talked about the Skanska case, too.

Yes, of course, in particular with our professor Christian Kersting on the panel! He gave a short summary of the ECJ’s judgement and its importance (see his latest English blog post here). The landmark decision confirms group liability in damage cases, including liability of parent and sister companies and – according to him – sister companies as well. Interestingly, the ECJ arrived at this conclusion directly from Art. 101 TFEU. Thus, the fundamental question rises which law is applicable to the cartel damage claim. While Advocate General Kokott and apparently Advocate General Wahl as well hold the view that questions of substantial law are to be solved under EU primary law and the national law is applicable to procedural questions, Christian Kersting argues for a clearly bigger role for the national law, which of course is shaped by the Damages Directive and the principles of effectiveness and equivalence. The panel agreed that the judgement will keep everybody busy for a while.

Sounds like a lot of stuff to chew on. Did you get anything to eat, too?

An exquisite 4 course menu at the KWINT restaurant. Unfortunately, we did not take photos. We were too hungry. Some dinner talk revolved around the fact that, apparently, Rupprecht Podszun has arrived in the 21st century now, too, aka on twitter. Welcome!

Oh dear. This topic hardly serves for four courses, though.

Donald Trump does. Henne Schuwer, who just retired as the Ambassador of the Kingdom of the Netherlands to the United States of America, gave us insider stories from his life as ambassador at D.C. with Presidents Obama and Trump.

Hope Trump did not ruin your appetite for macarons. What is on the menu for antitrust law in the near future?

Next in the September schedule will be our 3rd Doctoral Seminar in Düsseldorf! At least the two of us and the rest of the bunch of Ph.D. students will meet again there, together with Andreas Schwab, Wouter Wils, Raphael L’Hoest, Julia Holtz and the Düsseldorf Antitrust Bar. The day after, our Institute will host Forum Unternehmensrecht, this time with the Draft of the 10th Amendment to the German Act against Restraints of Competition. Two absolute highlights in the antitrust calendar that definitely shouldn’t be missed. D’Kart will keep you up to date!

Don’t say (if you want to follow Henne Schuwer in the Dutch diplomatic service): “The Netherlands are the McDonalds of the damage claims jurisdictions. It’s quick, it’s cheap and you’re still hungry afterwards.” (Tilman Makatsch)