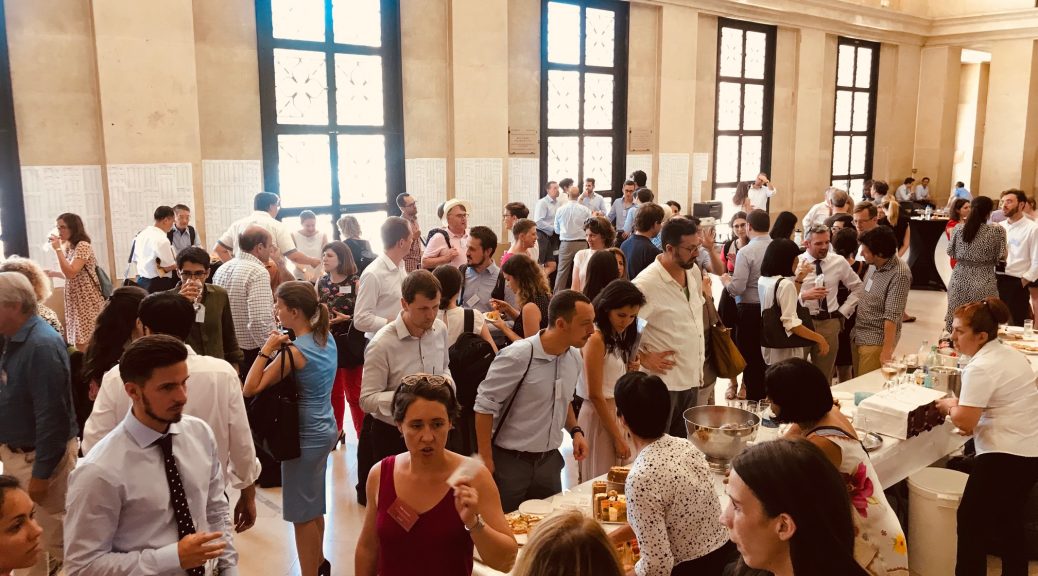 This was the hottest conference you could possibly imagine in antitrust. Literally: 42 degrees Celsius in Aix-en-Provence when ASCOLA met. ASCOLA is the Academic Society for Competition Law – it is the organisation where antitrust researchers from around the world meet once a year to explain to each other what they found out. Rupprecht Podszun was cooked (if not grilled) there, too. Here is his Conference Debriefing!

Host: ASCOLA, the Academic Society for Competition Law, headed by Professor Michal Gal from Haifa, and the University of Aix-Marseille with Professor David Bosco and his team

Audience: 100plus people, all of them academics, coming from jurisdictions from all over the world. Just to give you the Olympic spirit, there was a panel on exploitative abuse composed of Marco Botta (Max Planck Institute) and Alexandre de Streel (Namur), Miriam Buiten (Mannheim), Sagyun Lee and Jan Schißler (Korean University), Zeynep Ayata (Koc University) and Jasper Sluijs (Utrecht).

Ehm, yes, some of the names sound familiar but honestly: We are talking about a bunch of academics here? What about glossy star power?

Well, Henri Piffaut was there on the first day, he has just changed from Team Vestager to Team da Silva, he is a Vice President of the French Competition Authority now. Then there were academics-turned-judges like Paul Nihoul and Kristina Kowalik-Banczik, both from the European Court. Eric Posner gave a dinner speech on highly concentrated labour markets. And Bill Kovacic, this never-resting steam train of international antitrust, made one of his sui generis-appearances. But if you are looking for shiny posterboys and -girls don’t go to Ascola. Here, it’s not names that count but thoughts. You will not find such an intense forum of avant-garde thinking elsewhere in the antitrust community.

May I remind you that many people felt it was pretty “avant-garde” what the Commission and the Bundeskartellamt did with Google and Facebook?

True. And now we even get the theories for that! In fact, many scholars engage in filling the gaps left by the Commission and the Bundeskartellamt in their decisions. Academia now tries to integrate the cases into a more general framework of antitrust. This involves opening up to other fields of the law, like data and consumer protection, and reassessing the goals of competition law. Stavros Makris (EUI) spoke in favour of “responsive antitrust law”, placing this into a more general debate of legal theory.

So, all you scholars are in favour of stretching the limits of competition law?

Not sure – there were more than 100 presentations, but I was only able to attend so many since most of them took place in parallel sessions. My feeling however is that a large majority of people accepts that there was under-enforcement in the past. Yet we are academics, we are arguing all the time, and Dirk Auer (Liege) for instance offered a less critical view of big tech than others. The final panel serves as a good illustration of the spectre: Spencer Weber Waller from Loyola University Chicago made a powerful statement against U.S. (non-)enforcement as being completely out of touch with developments. For purposes of illustration, he referenced trashy B-Movies: In Spencer’s world, the U.S. is The Omega Man of competition which means something monstrous. Shilpi Bhattacharyia (OP Jindal Global University) jumped in with an analysis of predatory pricing by firms like Amazon and its relation to modern management theories. And then, Edith Loozen from Rotterdam gave a talk, very focussed, very down to earth, no references to pop culture, and she argued that only strict competition policy enforcement, based on tough evidence requirements, can lead the way forward. She discussed this with a view to what I would tip as the next big thing in antitrust: sustainability.

So, are you siding with Edith, Shilpi or Spencer?

With all of them! If this sounds inconsistent to you, you probably have to get your dialectics right… Please bear with me, it is hard to make up your mind on what’s right and what’s wrong if you get such fundamental input in three days. The general topic of the conference was: “Challenges to assumptions at the basis of competition law”. Michal Gal, Ascola’s formidable president, and David Bosco, the ever-friendly host from Aix, had chosen this as a topic a year in advance probably not guessing that this would be so timely.

Oh, it went that deep? To the assumptions at the basis?!

Even deeper. People reminded each other that antitrust law had not been drafted as an efficiency-enhancing pure economics exercise, but as a political project. Elias Deutscher (East Anglia) associated competition law with the idea of republican liberty, Cicero, you know, and he framed antitrust law and its agents as “institutions of anti-power” in the tradition of Karl Polanyi. If you are more into hands-on stuff you may have enjoyed the talk by Wolfgang Kerber (Marburg) on data sharing in the Internet of Things, e.g. with connected cars. This is a hugely practical issue: How do we organise access to data in mobility? Decisions taken now may shape the competitive framework for years to come, yet the issues are all but traditional or easy to handle. By the way: Fabiana di Porto (Salento) and Gustavo Ghidini (Milan) advocated to put a reciprocity requirement into the proportionality requirement of the XS2A-rule in PSD2 for digital conglomerates vis-à-vis banks.

You are losing me now…

Sorry. PSD2 is the Payment Services Directive 2015/2366, and it provides for mandatory access for third parties to accounts – access (XS) to (2) accounts (A), okay? This XS2A-mechanism is thought to be a model for access to data in other sectors as well, so this is another example of competition issues creeping into regulation, and vice versa.

I take it that everything was about digital.

Not everything. But it is sexy to do the digital stuff – even for full-time academics who are far from mundane trends and worldly possessions. There was a panel called “Agreements in restraint of trade” with presentations on resale price maintenance and hub and spoke cartels. I heard that not a single person showed up – apart from speakers and the chairperson. Thomas Cheng (Hong Kong) joked that the panel would probably have been overcrowded if it had been called “digital restraints of trade”.

Speaking of worldly possessions… There is an award, right?

Even two! Tadeusz Skoczny, a long-time supporter of Ascola from Warsaw and an influential academic who worked on spreading EU competition law in Poland, was awarded an honorary membership. Several of his former students were in the room, they are now renowned competition experts standing on their own feet. The Best Junior Paper Award went to Viktoria Robertson from Graz for a paper on excessive data collection. Last year, John Newman from Miami had taken that award with him, and this year he would definitely have qualified for Most Immaculate Dress at the Conference Dinner in the male category, even though I still wonder how he managed to keep on that fabulous jacket for longer than 10 minutes in that heat.

Hang on… who won in that category for females?

I would not even dare to give a shortlist on this, let alone choose a winner. So let me quickly say a word on Newman. This year he presented a paper on “attention” as the erroneously belittled sister of “data” in antitrust. Many people liked that, and obviously it relates well to the on-going inquiries into online advertising.

I see. Was there any thinking inside the box?

Sort of. Economist Jorge Padilla was the man in the box! He was not able to make it to Aix and instead stayed in front of a Skype camera to engage in a discussion with EUI’s Giacomo Calzolari on price algorithms. Unfortunately, his Skype window moved through Calzolari’s slides like a robot out of control. It was funny, and the discussion still was intriguing. Someone who has known Jorge for longer told me that he actually moved on substance as well. Sometimes, it seems that economists are now more vocal for change than lawyers. As Anne Witt (Leicester) put it: Law and economics, legal principle and open interpretation – all that is “in a limbo”. A more highbrow way to put it was advanced by Ioannis Lianos (UCL) who claimed this was “polycentric competition law”.

What did you present on after all?

Sorry, I am one of the digital guys. I gave a talk on digital ecosystems. They have huge incentives to reduce the sovereignty of other market actors, consumers and suppliers alike, to take their own profit-maximizing decisions. I could imagine to see the systemic reduction of decision-making authority of trading partners as a violation of Article 102 TFEU. André Boix-Palop (Valencia) who spoke in my panel as well suggested, as did others, to see dominance as such as a problem. Size matters, you know. But I also spoke on a panel how to teach competition law.

Ah, right, all you academics plant your crazy ideas into the minds of future counsel.

Yessesssessesssssss, but I think the money-oriented re-education programmes in law firms work quite well… In that panel on teaching there were Simonetta Vezzoso (Trento), Bill Kovacic (George Washington), Spencer Weber Waller (Loyola), Michal Gal (Haifa), Juliana Oliveira Domingues (Sao Paolo) and me, so very different people from very different places. We were asked to talk about the biggest challenges in teaching competition law and how we tackle them. And guess what – all of us went for the same issue: How do we get the silent majority in class involved that hides behind a wall of screens? It seems to be a global problem that students everywhere enjoy being passive.

Any other trends you noticed?

Three of them. First on methodology: I had the impression that there was less empirical research than in the years before – even though I was thrilled to learn that the Swedish Competition Authority sponsors an empirical study on fairness goals in EU competition law, undertaken by Marios Iacovides and Konstantinos Stylianou. I hope the Bundeskartellamt starts handing out grants to academics some day. Secondly, I heard the word “ordoliberal” quite often, and not as an insult. Seems as if the Freiburg School of Ordoliberals manages to capture well the regulatory ideas that are currently trending. Thirdly, there were many tweets on Spanish this time round. Or was it Portuguese? Couldn’t really tell, but the community there seems to be growing and become more influential.

How well that fits with your next destination, does it not?

Exactly. In June 2020 Ascola will have its annual meeting in Porto. Sofia Pais, the next organiser, painted Porto in nicest colours, seems to be a beautiful city. If you want to be part of it, go to Ascola’s website and become a member – but you need to work mainly in academia to qualify. Having said that, I guess that the beauties of Porto and the miracles of Port wine will be largely behind conference room walls next year. I hardly got a foot set on the famous Cours Mirabeau in Aix.

But you did some Rosé wine tasting, please!

The social programme on the final day had that in a chateau, but most participants had already left – back to desks to write papers or off to the next conference… Tchin-tchin!

Do say: Is the air-condition working in that room?

Don’t say: You have one minute left for wrapping up your talk!

Full disclosure: Rupprecht Podszun is the Vice-President of Ascola.