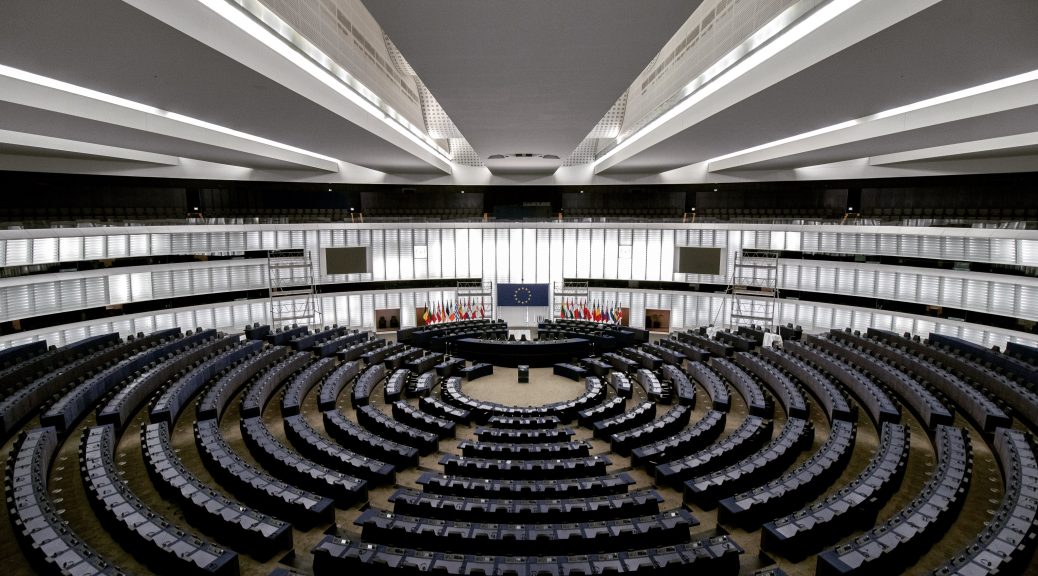 In the 2019 European Parliament election, friends of antitrust law are looking forward to one question in particular: Are we seeing Margrethe Vestager again as the next President of the European Commission? That, however, is so speculative that we are entering more secure territory: Election promises. Maximilian Konrad has reviewed the party programmes for those for whom voting advice apps have too few questions on competition policy.

Brexit, refugee crisis, right-wing populism, euro crisis – there is no shortage of European policy issues. But what about European competition policy?

Time to take a look at the German parties’ competition policy programmes. The parties have a surprise or two in store, but also disappointment.

We are approaching the political arena strictly neutrally according to the electoral results of the parties in the European election 2014 – let the show begin for the Competition-Competition!

“Competition for Europe, European champions for the world.” This is how the competition policy section of the CDU/CSU European election programme could be summarised in one sentence.

After praising competition as the cornerstone of the social market economy, guarantor of improved products and creator of innovations, the last sentence of the section on competition policy makes a sudden turn: Competition in Europe should be strengthened, but in key areas the emergence of European champions must be made possible by “better cooperation” between companies.

Dr. Jekyll and Mr. Hyde? Was Peter Altmaier’s National Industrial Strategy the inspiration for this? Does the European ministerial approval greet from afar? The elephant in the room is, of course, China, to whom the last sentence calls a “tu quoque”. At the national level, the Miba/Zollern ministerial approval will show how the Federal Minister of Economics, Peter Altmaier, regards the protection of competition. Those who want to know how competition in Europe is to be protected when “better cooperation” creates politically desired positions of dominance will have to vote for the CDU/CSU.

SPD (member of the European Socialists)

The SPD promotes international solidarity. The model for the SPD’s strategic industrial policy is the “AIRBUS concept”, which has brought international competition on the aircraft market into being. (The fact that such a concept can cost taxpayers a lot of money, only recently several hundred million euros for the development of the A-380, is only mentioned in passing. By the way, as early as 1988 Martin Bangemann, a liberal Minister of Economics and later EU Commissioner for Industrial Policy, had initiated the Daimler/MBB merger, which was ultimately approved by ministerial approval, on the grounds that the Airbus risks had to be passed on from the taxpayer to the private sector.)

But back to the present. In addition to an active industrial policy, the SPD programme criticises the principle of competition. Even though the SPD wants to protect competition and democracy by regulating digital platform giants, above all the SPD criticises the fact that „the economic ramifications oriented towards competition reach too deeply into society”. The public goods of education, health, local public transport, care and public infrastructure should therefore not be left to the market.

The Green Party’s competition policy programme is full of surprises. It begins with a great praise of competition: Fair competition ensures technical and social innovations and prevents monopoly profits at the expense of consumers.

The first surprise: in order for European competition policy to meet the demands of the globalised 21st century, the Greens call for an independent European antitrust authority that takes account of the global market in non-European (sic!) mergers and does not restrict itself to the European market. DG COMP as an independent European Antitrust Agency! (That global markets are examined where necessary – well, let’s not fixate on that).

In the view of the Greens, in the future, extra-competitive issue should also be taken into account in merger control. This lesson is drawn from the Bayer/Monsanto merger.

The next surprise: the proof of abuse of a dominant market position is “as a rule” not possible, which is why companies should in future also be split up notwithstanding of a proven market abuse if their market power is too big. In particular, the “Facebook empire” created by the mergers with Instagram and Whatsapp is to be broken up by unbundling, and Google, Amazon and Airbnb are also threatened with stricter regulation.

Finally, fair competition for the Greens also means preventing excessive wage competition within Europe. An independent committee should enforce a Europe-wide maximum distance between the highest and lowest salary within a company in order to strengthen social cohesion.

Courageous proposals – and by far the longest and most progressive competition policy programme. A background paper by the Bundeskartellamt on the subject of unbundling is recommended to interested readers (likewise the Greens might want to consider a little more digging into the status quo).

The LINKE fears that if competition in the EU increases, the strong regions will be strengthened and the weak regions weakened. For die LINKE, the current discussion on „Industriepolitik“ (industrial policy) is therefore not a coincidence, but an admission that the market has failed.

The LINKE therefore calls for “an industrial policy from the left for a social-ecological transformation of the economy”. In addition to ending the austerity policy and strengthening domestic demand, for the LINKE this means promoting small businesses and businesses in the villages and inner cities in order to create jobs. One might think that these are the objectives classically to be achieved by strengthening competition.

Yet, the LINKE relies on a coordinated European industrial policy, not competition, to distribute EU subsidies uniformly. The (future) plans of this industrial policy are to be drawn up by “representatives of politics, trade unions, companies, science, environmental associations and civil society”.  (At least the word “council“ is not mentioned here.) Specifically left industrial policy means for the LINKE that targeted investments should be made in structurally weak and changing regions (*cough*East Germany*cough*).

In light of this, one cannot complain about a lack of political alternatives.

Talking about alternatives, wasn’t that the AfD‘s claim to be a political alternative to the party cartel?

However: Nothing new under the sun in competition policy. Like all other parties (sorry, SPD), the AfD praises competition as a guarantor of technical progress and favourable consumer prices, while – unsurprisingly – strictly refusing to sell out the economy to China. The AfD also complains that an escalating bureaucracy is driving innovation and investors away.

Oh yes, in the event that fundamental reforms of the EU prove impossible, the AfD calls for the unbundling of the European Union and DEXIT.

In order not to expose D’Kart to the accusation of the abuse of media market power (catchword: fake news), let’s just leave it at that without further comment. Or is a no-comment-policy also a form of discrimination?

FDP (member of the Alliance of Liberals and Democrats for Europe)

Chapeau, FDP! But what about the challenges of the future, digitals platforms, China and – horribile dictu – industrial policy? At least, the FDP demands that mergers below the applicable turnover thresholds should also be subject to merger control if network effects pose a particular threat to competition (a hint to Facebook/Whatsapp/Instagram).

But perhaps a party for which Margrethe Vestager is running as a candidate on the European level simply does not need a more explicit competition policy programme.

Let’s show some heart for underdogs. As long as the small parties have not yet been forced out of the market by the “Lex germania“, we would also like to take a quick look at the Free Voters (a party somewhere on the conservative-liberal spectrum), the Pirate Party, and the Animal Welfare Party, all of which scored between 1 % and 2 % of votes in the 2014 German EU Elections.

The Free Voters’ programme lacks a section on competition policy. A few statements on the subject of competition can only be inferred indirectly: The Free Voters, for example, are in favour of the promotion of small and medium-sized enterprises, and are therefore likely to oppose the creation of European champions. They also advocate keeping the water supply in public hands and protecting the taxi market from new mobility solutions.

The Pirate Party has set up a joint program of all European pirate parties (Wow, true European spirit!). Unfortunately, however, the programme is quite short and contains hardly any statements on competition policy. The Pirate Party criticizes copyright and patent monopolies. They also want to ensure transparency and competition in the energy sector.

Despite an extensive European election programme, the Animal Welfare Party also lacks almost any statements on competition policy. They want to expand the antitrust laws against financial institutions and monopolies, but how they want to do that remains unclear. However, they want to take social and ecological aspects into account in merger decisions.

Let us put it this way: in view of these programmes, there is still room for a small party to promote competition. Meanwhile, the little ones can familiarise themselves with the cartel party theory.

After reviewing the party programmes, there is not much left of new ideas on competition policy. Given the central role of competition in the single market and the multitude of current challenges, we remain astonished. But maybe the apparent lack of ideas is only a commitment of the parties to the successful work of DG COMP.

However, the current heavy use of the term “Industriepolitik” indicates a loss of confidence in the international competitiveness of the competition principle. Are we experiencing the start of a new competition of systems with China? And will the European Antitrust Agency soon unbundle Google, Amazon and Facebook? On May 26, you have the vote!

Dr. Maximilian Konrad, MSc (LSE) works as an associate in a law firm in Karlsruhe specializing in civil law appeals. He has gained experience with competition policy in his PhD thesis on “The common good, public opinion and ministerial approval under merger law” (Duncker & Humblot, Autumn 2019).

Disclaimer: The author is a member of the FDP.

One thought on “The Competition-Competition: The German Parties’ Competition Policy Proposals to the 2019 European Parliament election”