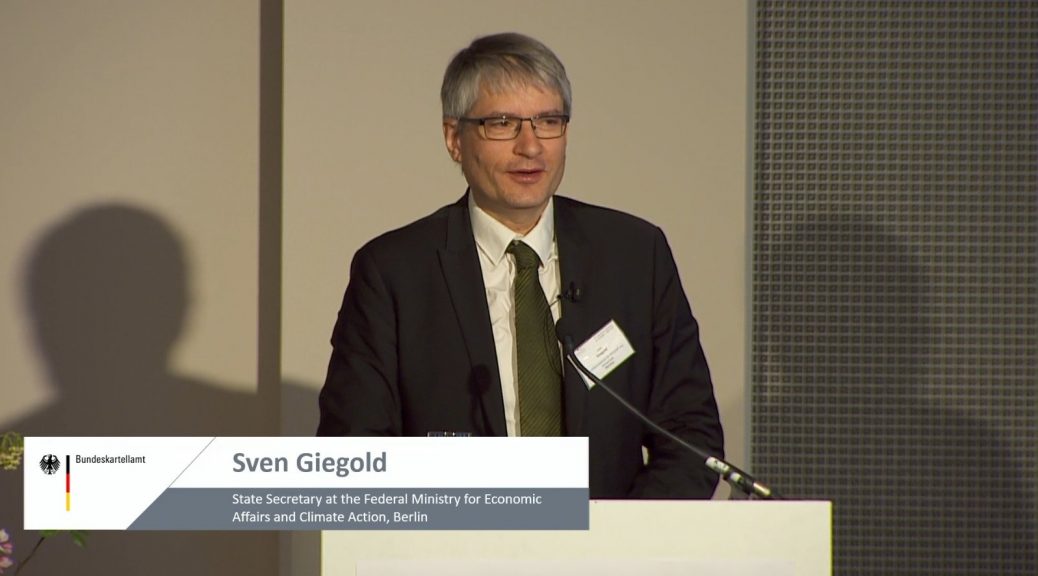 The German Federal Cartel Office has once again invited the best of the best from the competition community to Berlin for the International Cartel Conference (IKK). Sven Giegold, Secretary of State in the German Federal Ministry for Economic Affairs and Climate Protection (BMWK), gave an ambitious speech about his plans for Germany’s and Europe’s future in the field of competition policy. D-Kart has kindly been provided with the full text from his speech, we document it here – not least since it fits perfectly with our Agenda2025-series.

Sven Giegold’s Speech at the International Cartel Conference, Berlin, 4 May 2022

Many thanks for the invitation. This forum is a great place to discuss how we can achieve better international cooperation and even harmonisation in competition policy. There are differences in instruments, but the overall direction of competition policy-makers and enforcers at this moment in time is the same. We should use this window of opportunity and enhance cooperation.

Let me underpin this “window of opportunity” frame with a transatlantic historical view on the antitrust pendulum.

Starting in the 1970s into the 1990s, the so-called neoliberal and Chicago School thinking triggered a battle for the soul of antitrust world-wide and had a deep impact on economic policies.

Before in the US, the Sherman Act had been enacted and enforced following a plethora of economic and societal goals. There was a firm recognition of the need to constrain private power to protect society and democracy. As this famous quote ascribed to Justice Brandeis reads: “We can have democracy in this country, or we can have great wealth concentrated in the hands of a few, but we can’t have both.”

In Germany, legal scholars and economists such as Walter Eucken in the wake of the Second World War thought deeply about the interdependencies between private power, democracy and society.

These broader concepts gave competition policy both in the US and Europe legitimacy and a solid foundation to look into market structures and apply per these rules in abuse of dominance cases.

The Chicago School brought this to an end. By focussing on consumer welfare as the sole purpose of antitrust, it brought economic rigour. But it also impoverished competition policy.

The European Commission bought into this ‘antitrust redux’ to some extent under the heading of the “more economic approach”.

With some Neo-Brandesians now in charge in several national public institutions and the Europeans being proactive on digital markets for some time, are we witnessing a “Zeitenwende” in antitrust? Maybe not that far. But it is fair to say that the antitrust pendulum is swinging back from Chicago to some extent.

My hope is that for some time to come, we will see a trend towards more structure-oriented and broader-based competition policies beyond a too narrow, short-term consumer welfare thinking for five reasons:

First, concentration levels and mark-ups. There is a lively and complex debate among economists about the causes and consequences of the rise in concentration, in particular in the US. The French economist Thomas Philippon [“The Great Reversal”] has shown that mark-ups are systematically related over time and across countries and industries to the changes in concentration. So, we do need to look into market structures.

Second, demand by voters. Citizens increasingly ask the question whether states still have the power to regulate global firms. There is political momentum to raise the power question in capitalism. Competition policy has proven over time that it can constrain private power. Some policies on consumer markets can set de facto world-wide standards – nicely described for the EU as “The Brussels Effect” by the academic Anu Bradford.

Third, inflation. The relation between inflation and competition is not straightforward. But some mechanisms are clear: Innovation competition may dramatically reduce prices. Politically, price increases already give competition enforcers some tailwind. In some markets, exploitative pricing may be limited by antitrust action. And in competitive markets, price and tax reductions should be passed on to consumers. As a side-note in this context: We have to think about the drop in leniency applications and about reinforcing the fight against cartels.

Fourth, sustainability. I know that many of you are discussing the relation of competition and sustainability in your jurisdiction, at least with a view to improving legal certainty. The European Union has published its draft Horizontal Guidelines. I see them as a starting point. For Germany, we will decide on further clarifications within the reform of our Act against Restraints in this legislative cycle. But let me also be clear here: The main way to protect the climate, to improve sustainability on all fronts is to internalise external costs and to raise standards through legislative instruments outside competition policy. And – as the Minister pointed out – competitive open markets supporting disruptive technologies are key to achieve the objectives of the Green transition of our economies.

Fifth, the digital revolution and platforms. Non-price effects and open-ended balancing have demonstrated the limits of the consumer welfare approach on rapidly-evolving platform markets and in digital abuse of dominance cases. The Digital Markets Act is a direct answer to these limits, but only if it is properly enforced.

On the DMA, let me first say that the German Federal Government regards it as a major achievement. We had asked for additional instruments on the digital gatekeepers on the EU level for years. In Germany, we adopted a particular provision on big platforms with leveraging power across markets last year.

As a staunch supporter of transparency and controlling lobbying in legislative procedures, I can say that EU legislators withstood the many efforts by the GAFAs.

Let me express one sceptical note on the DMA: It has – rightly – been labelled as a permanent abuse control “on steroids”. It mostly shies away from structural measures. In that regard, I put some hope in our US colleagues.

In my view, in the EU we need to think about reinforcing structural measures and instruments.

One particular area where we need reinforcement is EU merger control. The number of interventions in mergers has dropped over the years. Unfortunately, and to some extent incomprehensibly, the European Commission so far has resisted calls to look into the EU Merger Regulation and the underlying substantive Guidelines to better deal with killer acquisitions. We need reform here.

Second, we should think about reviving the New Competition Tool debate. In preparation for the DMA, the European Commission had tabled the option of an instrument to address structural market deficiencies, independent of an abuse of power.

Third, market investigations can be a good screening tool and starting point for proposing structural measures towards better markets. The British CMA may provide good examples here. We will look into giving more flexibility to the Bundeskartellamt in its market investigations, when reforming our national competition law. Market investigations and structural remedies should also be on the table for the upcoming review of Regulation 1/2003 that Commissioner Vestager has announced recently.

These are just some of our proposals and intended measures. In February, we also presented a more comprehensive national ten-point plan on competition policy.

Before I conclude, let me shortly express my recognition and gratitude. As some of you might know, I am a firm believer in public service.

I would like to thank in particular the competition enforcers who are present here today for their hard work. You have to cope with politicians like me who would like to see immediate market results. You have to withstand the siren song of big pay cheques by law firms and big tech jobs. You have to deal with sometimes over-rigorous courts which have plenty of time to dig into every detail of your decision.

I would like to encourage you to keep on rolling and doing your job – you work not only in the interest of short-term consumer welfare. Democracies are fragile. Markets are fragile. Your work protects the freedom to compete and sometimes the freedom of expression.

And if I may express a wish: Be courageous and bold.

Sven Giegold is the State Secretary in charge, inter alia, of competition policy at the German Ministry for Economic Affairs and Climate Protection since 2021. He was a member of the European Parliament for the Green Party before. He is a co-founder of Attac. Photo: Private