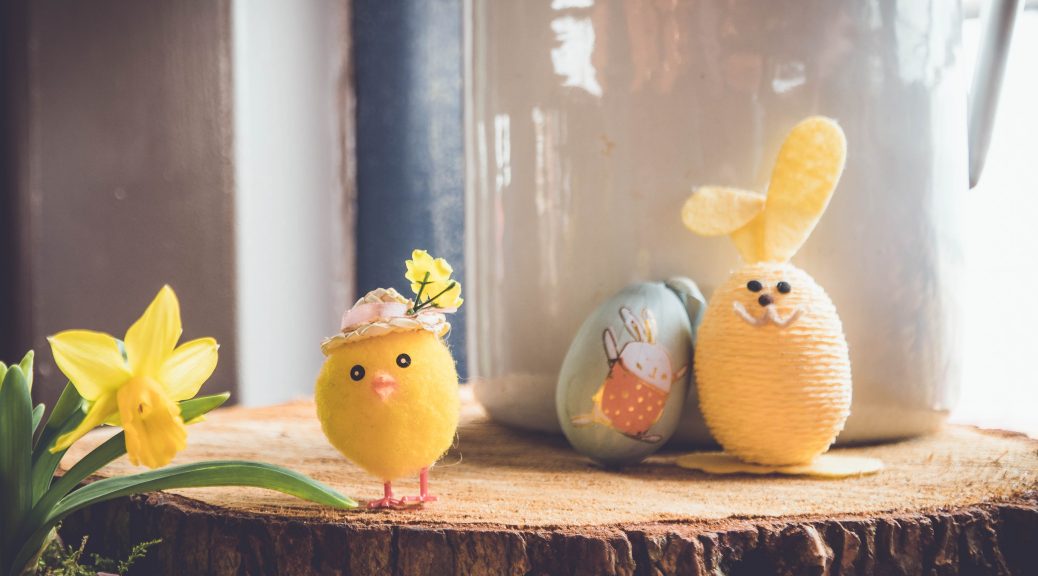 Everything is much easier when the sun is shining, Easter break was good, rabbits hobble through Düsseldorf’s city parks – freed from the burden of the Easter baskets, somehow even waste separation seems simple, and so do the developments in antitrust. It is only our very own Rupprecht Podszun who is unimpressed. Here are his SSNIPpets – small but significant news, information and pleasantries – our pet project!

Miba/Zollern and the Monopolies  Commission

When I was still a student, you found stickers here and there with an absolutely convincing insight: “Sometime, they’ll give war and nobody will come.” Pacifism, it is as simple as that. Now, I thought of this when I reviewed how non-violent and peaceful the, well, “dispute” over the application for a ministerial approval in the Miba/Zollern case is.

Just to give you the background again: The German Bundeskartellamt prohibited the merger of two metal industry companies, Miba and Zollern. They applied for ministerial approval – the German Minister of Economics has the right to overcome a Bundeskartellamt-veto in merger cases on grounds of public interest. Such applications are very rare, always tricky and currently politically charged because of the discussion about a European ministerial authorisation, which was initiated after the prohibition of Siemens/Alstom. That is actually a lot of food for excited discussions.

But what happens in this case? Nothing much. Case IB2-20302/14-02 is on course with little public attention. The fact that an application for ministerial authorisation was filed in February went unnoticed for a long time. When it was reported in the press, there was little excitement. Now the Monopolies Commission, an advisory board, gave its opinion and recommended not to grant a ministerial authorisation (sigh!). And the echo is: hard to hear.

The press release published by the Monopolies Commission (the opinion itself is not yet available), gives the impression of a very straight-forward opinion. According to the Commission, the German Minister may only grant an authorisation if public interest is affected in Germany (other EU countries do not suffice). On substance, the case deals with bearings technology… I realised that this is the reason why we do not have uproar anywhere: It’s just not sexy. The ban could lead to a loss of know-how in the field of plain bearings for wind turbines? Yawn. 450 jobs can be saved? Wow. Edeka/Tengelmann, the last authorisation case, dealt with 16,000. War is over. (And the legal dispute in the case of the granting of a ministerial permit is cut off anyway due to an amendment that reduced the possibility to complain to court.)

Nightmares for a Minister

The calm around the case is no guarantee for a blessed sleep of the responsible Federal Minister of Economics. Since we are so close to Easter let me put this in biblical terms. Matthew 5:39 says that if someone strikes you on the right cheek, turn to him the other also. Peter Altmaier, the German minister, often turns a cheek at the moment. He has a lot of opponents for his National Industrial Strategy and business people in Germany long for the return of a politician-turned-Blackrock manager called Friedrich Merz. As a Catholic, however, Altmaier does not strike back at their constant assaults, but turns the other cheek. And at this very moment, Miba and Zollern strike him with an application for ministerial approval. This is traditionally the material that ministerial nightmares are made of. (If you don’t believe that, please ask Sigmar Gabriel, one of his predecessors who nearly lost his job over a ministerial authorisation in the Edeka/Tengelmann saga.)

Should Altmaier trump the Bundeskartellamt and wave through the project against the advice of the Monopolies Commission, he can be sure that he will have to turn a cheek again. If he should not grant the permission, presumably also. Perhaps that gives him the strength to abolish this relic in the German merger control regime altogether!

Sit back, order some popcorn please, this will be a good one: Idealo is suing Google for damages amounting to 500 million € for a violation of Art. 102 TFEU. The case, filed at the Berlin Regional Court, is a follow-on action to the Commission’s Google Shopping decision. This is rare enough: So far, actions for damages have been directed primarily against cartelists, not abusers.

Axel Springer company (which is behind the price comparison service Idealo) and Google are two attractive fighters of an upper weight class. The plaintiff has, as the glossy magazine Juve reported beautifully, teamed up two law firms that make a fantastic combination: Freshfields and Hausfeld. In Germany, Hausfeld is an outlaw, if I may say so, for the more traditional competition law firms. Freshfields and Hausfeld fight bitterly in Dieselgate proceedings. It is like asking Theresa May to cooperate with Boris Johnson and Jeremy Corbyn on a Brexit deal.

A conference entitled “Competition Law and Sustainability – addressing the broken links” will be held at Sciences Po in Paris in June. The conference will be hosted by a group called “We are competition”, which identifies itself as an “independent student initiative”. The website hardly mentions any names. (You know that you will find an overview of important antitrust events in our antitrust calendar, don’t you?) I find the Call for Papers remarkable because, firstly, I always find it exciting to see what ideas students come up with, that is my professional curiosity. Secondly, they call for the integration of sustainability issues into the field of antitrust law, just like that, unvarnished. ClimateKids go antitrust. Since I have been working on it more intensively, I have noticed that it is not as clear-cut as we thought that the competition principle trumps everything.

Thirdly, I also wonder what generation of antitrust lawyers is coming next here. What does an antitrust law look like when those have the say who are now initiated to competition law? These are students who grow up at a time when Lina Khan’s “The Amazon Antitrust Paradox” is considered the most important essay, and who are opposing the merger of Bayer and Monsanto (if for different reasons than the shareholders of Bayer).

The Bundeskartellamt is often compared to the Bundesbank: Two decades-old institutions with an unshakeable reputation in Germany, independent, incorruptible, with a flavour of the good old times, guaranteeing economic success. The Bundesbank, the German central bank, probably suffered a little more than our buddies in Bonn from competition with European sister authorities.

Now, one institution is interfering in the field of the other. No, no, don’t worry, the Bundeskartellamt doesn’t do monetary policy now, after all it has enough to do with data protection. It’s the other way round: Bundesbank board member Burkhard Balz warns against the dominance of American payment systems such as Apple Pay, Google Pay, Paypal. Balz is experienced as a politician and as a banker. In recent interviews he explained that US companies are increasingly steering and taking over customer relations and are thus degrading others – here: the German banks – to a mere supply function. I fully agree with this analysis (and, I say this most humbly, I elaborated on that some time ago). Balz has two antidotes on his mind: First, the possibility for third parties to access data as provided for by the Payment Services Directive (PSD-II) as of September. This seems to me to be an interesting approach. Secondly, Balz recommends the development of a national champion. That seems to me to be a less interesting approach. (For those who can read German: It is definitely interesting to follow Hanno Bender’s blog on this subject!)

I started this blog today with a 1980s quote on how to prevent war. Let me tell you another thing: The best waste is the one that does not even come into existence. Waste prevention is still the best way to protect the environment. The best way to prevent a merger prohibition after you notified your project to the authorities is to withdraw the application. The Bundeskartellamt was pretty succesful in making companies withdraw their applications recently. Amongst others, Gruner & Jahr, the publisher, withdrew the notification for renewal of a license for the German edition of National Geographic, the magazine.

As of now, the notification of the takeover of DSD (Duales System Deutschland) by Remondis has not yet been put into the waste bin. However, the Bundeskartellamt sent out its statement of objections and made it clear that this is not an easy one for the parties.

If the 4th Decision Division, chaired by Eberhard Temme, decides not to oppose the merger, this would be a mega-merger of the waste management industry: according to the Bundeskartellamt, Remondis is by far the largest player in the field in Germany. DSD is the leading provider of dual system solutions in Germany. (May I leave explaining what they do to the ECJ? Please see the judgment in case C-385/07 P!)

It is obvious that such a deal stirs some bad feelings for competition-minded people, to put it mildly. In addition, there are rumours that Remondis is a master of killer acquisitions: the company allegedly took over around 50 small competitors in recent years, a large part of these takeovers apparently did not require notification. When the President of the Bundeskartellamt, Andreas Mundt, called for new thresholds in merger control with a possibility to look at some that are currently slipping the net, he probably thought of this sector. However, new competencies can be thrown into the dustbin if there is no intervention in the really big cases.

Should Remondis/DSD, contrary to expectations, go unopposed, the case offers illustrative material for this strange contradiction: The takeover of a small competitor in a narrowly limited regional area may be highly problematic if caught under merger control provisions. The gigantic structural change through a merger of two leaders in the field, on the other hand, may be seen as unproblematic. This is the result of a merger control law based on market definition. Let’s get rid of it!

Late remorse in a cartel case

Since we deal with waste management, let’s quickly turn to batteries. This is related since I tend to forget to take old batteries to the proper waste disposal so that they are simply lying around for far too long. Obviously, they are not for residual waste, ladies and gentlemen! Anyway, these are my problems. Others have other problems. For instance, they face unpredictable court proceedings in Düsseldorf.

The Bundeskartellamt published an “updated case report” of the battery cartel, according to which the Hawker company has shown timely insight: Hawker lodged an appeal against the fining decision of the competition authority. Later, it decided to withdraw the appeal and to cooperate and settle (!) with the Bundeskartellamt. Attorney Till Steinvorth marked this in his Twitter with two red exclamation marks as “Highly unusual” – after all, the case had already been closed by the Bundeskartellamt. The Düsseldorf court, the appeal instance, seems to have a disciplining effect on all parties involved.

Finally, I have a request for information: 45.7 % of Germans, according to a recent study, believe that there are “secret organisations that have a great influence on political decisions”. In my interpretation, “secret organisations” does not mean our closed shop forum on antitrust law at my university nor, to become Easterly again, the People’s Front of Judea. If you, dear reader, are a member of a secret organisation running politics, please contact us. We still have some wishes for some of the upcoming decisions on economic policy.

Have a nice weekend!

One thought on “SSNIPpets (27): Post-Easter”