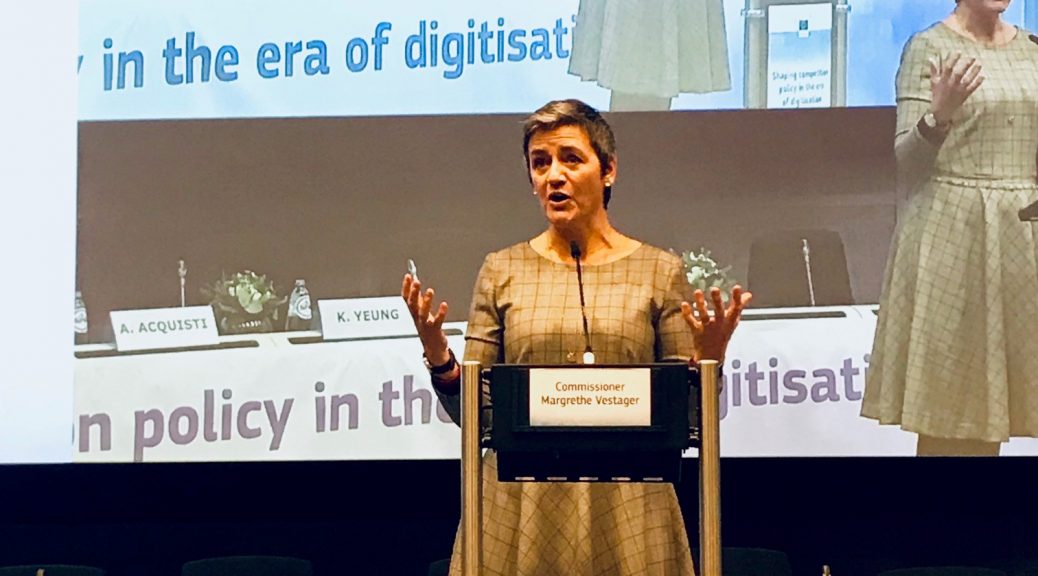 Breaking News: Margrethe Vestager remains in charge of competition in the new European Commission. While overseeing the digital agenda of the Commission as a Vice President, she will also head DG COMP as the Commissioner. Enforcing competition rules, dealing with state aid and coordinating the digital promises of Ursula von der Leyen’s college of Commissioners seems a lot for one person – but, hey, she took on Google, Apple and the like without fear. Mme. Vestager will probably become the longest-serving competition commissioner ever (if this Commission holds). Hans von der Groeben, the very first Commissioner, served from 1959-1967 – a number to beat.

On the one hand side, Vestager will probably continue her stance on digital giants – since this earned her the Executive Vice Presidency (and nearly even the Presidency). On the other hand side, things might still change. There is a new Director General to be expected after Johannes Laitenberger left for the Court of Justice. (At present Cecilio Madero Villarejo and Carles Esteva Mosso fill the void.) Also, as some people noted before, the most interesting cases now undergo judicial review. So the pioneering ideas Vestager and her team put into practice, be it on innovation theories of harm, Google or the application of rules others had not even heard of before, need to stand the test. This may be a challenge in some instances. With important legislative reforms on the table (e.g. the block exemptions regulations or the proposals on digital competition law) there will be interesting political questions to solve. Talking politics: Law enforcement and the VP policy role need to be reconciled.

Overall, competition friends should be relieved and happy: The former Danish Minister of Economics proved to be a dedicated enforcer, she stood up against calls for more industrial policy and she inspired many people in Europe to believe in competition and the power of the EU. (Full disclosure: We are among these people!) Having said that, with her additional portfolio she can now prove that this pays out in the digital age and that European citizens (and companies!) really profit from her course. Vestager, if you do not know by now, was born in 1968 as a daughter of Lutheran ministers. She studied economics, pursued a succesful career in Danish politics with the social liberal party, she is a mother of three and, another essential to know, served as an inspiration for the TV series Borgen. Finally, please expect some more knitted elephants in the rooms wherever she appears!

Good luck to the new Commission!